UI/UX: More Than a Pretty Package

Our daily lives heavily revolve around using applications, whether that be for doing actual work or just casually browsing the internet or chatting. We interact with our phones and computers almost all the time and we overlook the fact that a simple and beautiful interface makes it way easier on us. UI and UX are a huge part of our experience and companies put a lot of effort into developing and optimizing their interfaces.

Although UI and UX are sometimes used interchangeably and should work hand-in-hand, they are not exactly the same.

Both are very important and having one without the other just feels empty. A beautiful interface that is hard to use is just annoying. And an easy-to-use ugly interface is not compelling at all. Both of these should coexist to create the best experience for users.

myceleum uses GitHub actions for the CI/CD infrastructure and it has been amazing ever since it was setup. BUT even though it is not a difficult thing to setup, it is very easy to mess up. GitHub actions uses YAML (YAML stands for “YAML Ain’t a Markup Language” and I love the irony within it) files for their pipelines which, by itself, isn’t a bad thing; they are fairly straight forward to create but the issue is that they are highly dependent on perfect indentations and typography.

when I think back on the set-up process, or whenever I have to make tweaks to our pipelines, I always get a sense of dread creeping up -Bassem

I think that pretty much sums up the experience. It’s really not hard to do... just dreadful; a simple mistake and everything stops working. To solve this issue, myceleum has set up scripts to generate workflows based on cut-up smaller files which kind of helped the issue, but is still very error prone; everything can still get messed up if the files were not setup correctly.

Why an interface would help:

Here’s where a good interface could have been very helpful. By hiding those ugly steps behind a beautiful interface and generating the necessary files using templating engines, you are almost guaranteed to not have these formatting issues. And although this doesn’t imply that mistakes will never happen, it definitely lessen the risks of errors (and engulfs the user with the warmth and niceness of a pretty interface).

The industry is shifting towards developing good interfaces for everything. If we take for example IDEs, the work put on perfecting the interaction with the user is immense. Integrating terminals, source control, and file exploration is a perfect example of development focused towards simplifying the user experience by putting everything within reach. If GitHub could create something similar for developing your pipelines, it would save developers a lot of time and anxiety.

How myceleum’s interface makes everything easier:

myceleum follows the same ideology within their own application and gives the user a beautiful, streamlined interface. Which means that using the application is very easy and doesn’t take time to get used to. Everything docker related is processed in the background and the user doesn’t have to get tangled in that mess. Of course, a useful interface doesn’t stop errors completely as you can still input wrong information and crash the app and burn your entire pc to dust – as one does. But the errors are reduced immensely and the whole experience is just way easier and faster. 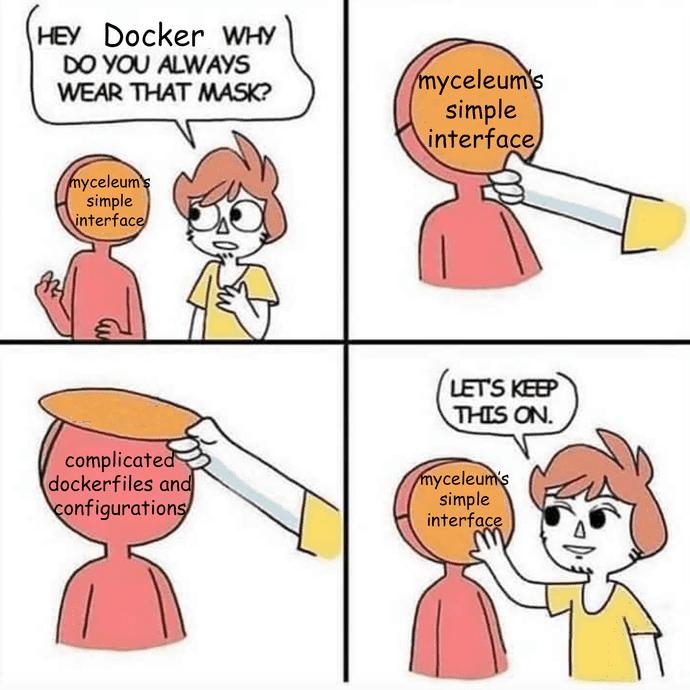 A good interface goes a long way in terms of ease-of-use and comfort. A beautiful interface makes you love the app. Both coming together is basically the chocolate and vanilla of ice cream; classic, perfect, comforting, and almost everyone’s go-to.